When surfers first came to Bali, the locals thought they were madmen.

Not only did they appear to walk on water, dancing across the faces of waves with mystical grace and supernatural abilities, but they were actually foolhardy enough to venture into the spirit realm of the ocean, where demons lurked beneath the surface to steal them into the blackness.

A lot has changed since those early days and Bali is witnessing an insurgence of local shredders. With consistent, world-class waves on their doorstep, Indonesian surfers are rapidly honing their skills, every lineup around the island’s coastline featuring a healthy handful of unknown stand outs.

I Gede Arya Eka Wira Dharma – better, and far more conveniently known as Ayok –  is Canggu born and bred. He has seen the quiet times, the boom in tourism and the inception and expansion of Bali’s surfing community. 12 years ago, when Ayok first ventured into the breaks around Canggu, Westerners were a rarity. He could still find empty lineups, even on the good days at the popular breaks, and the number of white faces in the water could be counted on one hand.

“I started surfing when I was nine years old,” he remembers. “Around that time there was still nothing here. We had to share one board between all of my friends. At that time, not so many grommets surfed. If you surfed, you were seen as lazy.”

Reflecting the disreputable surfing community of the 1960s in Australia and the US, surfing was still frowned upon until just a few years ago by Bali locals, especially by the parents of kids bitten by the bug:

“When we went surfing, we’d have to hide from our parents. One time, my dad came down to the beach with a bamboo stick and started beating me, screaming, ‘go back home!’ But surfing still made for a memorable childhood – it was good fun.”

Bali is known for its perfect shortboarding conditions and a rash of formulaic, cookie-cutter thrusters plague the lineups at all the most popular spots. While locals and visitors to Canggu do still get airborne on their high performance equipment, this little corner of Bali has become a Mecca for logs, fishes and alternative craft. Batu Bolong is a black-sand Waikiki-meets-Windansea kind of deal, single fin longboards the weapon of choice, waves rolling in, rather than wedging up and hollowing out, and the crowds, though challenging at times, invoke the aloha, sharing rides and leaving the adrenalin-fuelled aggro out of the picture.

“When I started it was all shortboards,” says Ayok. “I have seen people surfing longboards since I started, but only a few Westerners. About three years ago the locals started. Most of us are fishermen, so we wanted to get longboards so that we could put our lobster nets on the boards, so it started as a practical thing. I started longboarding about a year after that.

“When Deus came to Canggu, everything became different. The vibe here is different now – much more chilled. That’s why I changed, because it’s something different and more chilled in the water too. 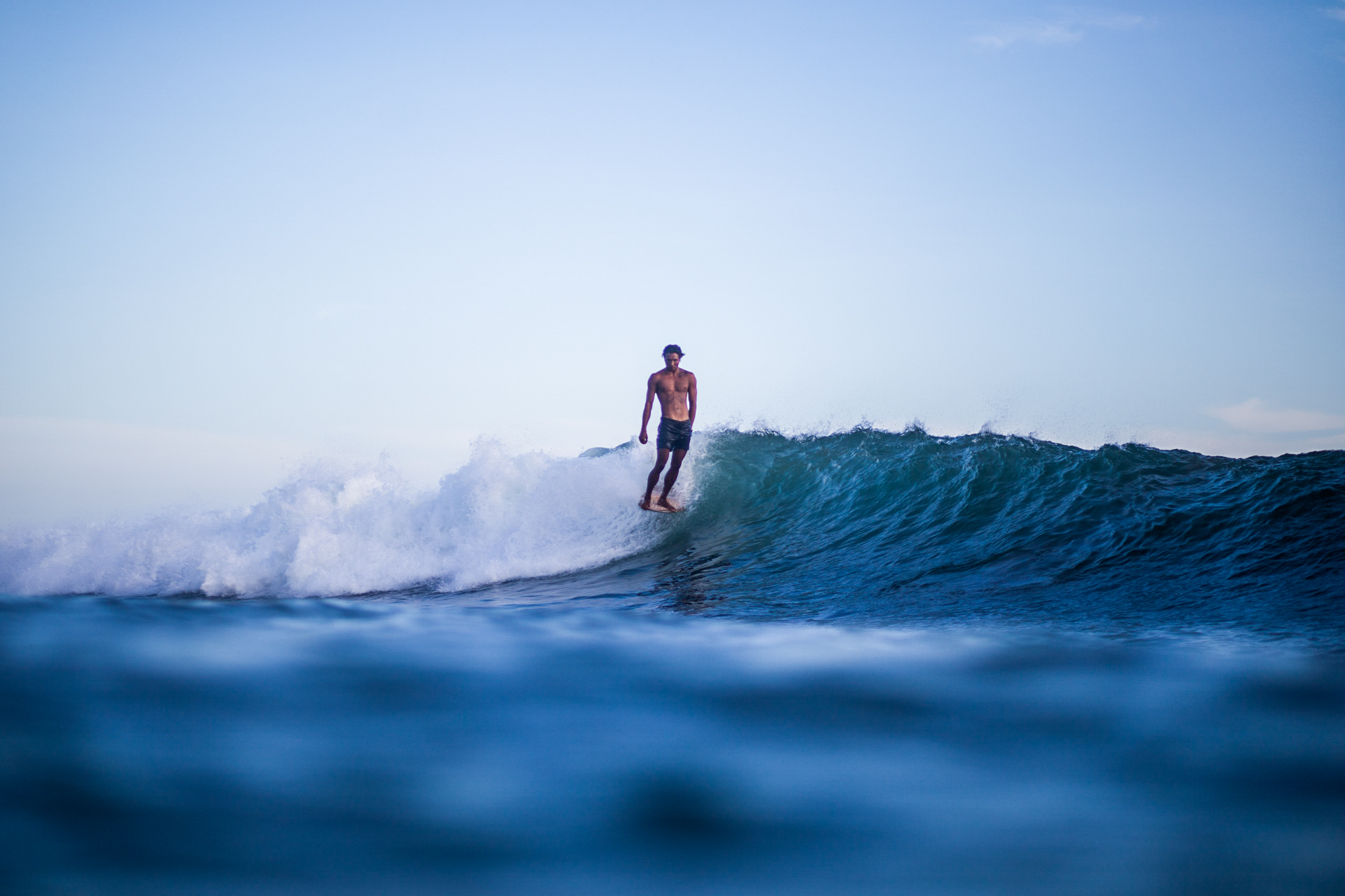 Batu Karas locals, Deni and his plus-nine collaborator Husni Ridhwan proffered an indelible impact on the latest single fin initiate, inspiring a smoother, more balletic approach to Ayok’s style. Bringing these traits back to the beaches of Canggu, he received further inspiration from the influx of foreign traditionalists, including Zye Norris, Matt Cuddihy, Harrison Roach and many more, a sponge to their influential form culminating in an approach that is as impressive as it is seemingly effortless, his sure-footed fluidity, linked turns and unswaying confidence resonating through the lineup.

Ayok has remained at his home of Canggu, leading the charge and drawing the attention of camera lenses whenever he paddles out.

“He has become a stand-out longboarder,” says Deus Bali director, Dustin Humphrey, who has watched his progression over the past half decade. “He has developed at such a rapid pace, with a beautiful style all of his own that makes him a stand-out amongst the locals and tourists surfing these beaches.”

He has embraced the diversification, both in his longboard skills and on more diminutive rides, whether fishes and single fins or, when the tides and swells require thrusters and quads…and he has become adept at it all.

“It just depends on the swell,” he says of his choices of board. “When the waves are really small, we come down with our longboards just for some fun. When it’s big, we still head to Echo Beach to get some barrels and more intense waves. We still manage to surf both, but the longboards mostly just for the fun of it.”

Though the passion for plus-nine craft often wins out, Ayok is no one-trick pony. The more traditional genre of boards in all its miscellany offers him adaptation to location and conditions, and where a log may be out of its comfort zone, Ayok reaches for his single fins. On the follow beach breaks of Echo Beach and the neighbouring locale, he can be found buried deep, throwing spray, feet planted firmly on a six-footer, a flex fin whipping him out of turns and holding him high and tight under the lip.

Despite his parents’ early reservations, surfing has given Ayok a life, not only in the peace and freedom in the water, but also financially. Ayok’s Stay & Surf is now open for business – a six-bedroom home stay where Ayok hosts predominantly surfing travellers from around the world, providing surf lessons and offering a lifelong stack of local knowledge.

“My main job is as a surf teacher. I worked for some local surf schools about three years ago and then I decided to build my guest house. It’s open for everyone, but my main focus is to bring people to Canggu to stay and have surf lessons. My family also has a little business at Batu Bolong renting surfboards.” Canggu has developed around him, moving through different chapters, expanding in population and infrastructure, but Ayok has developed with it, taking advantage of the tourism boom and continuing to make a life for himself in this unique place he calls home.

“It will get busier, but I hope it is just tourists, not the construction. I don’t want Canggu to become something like Kuta or Seminyak. It would be so disappointing. People come here to chill. They want to enjoy their holiday and they don’t want so many buildings. We are welcome to everyone.”

Deus has welcomed Ayok to the fold, his individualism in a sea of conformity bringing him to the attention of Dustin and the team:

“When I first saw him, it struck me how he was just doing his own thing, evoking the style seen so often in the longboarding waves of the world – California, Australia, Hawaii – but so rarely in Bali. I wanted to support him in his surfing to help him develop in a way that would otherwise be challenging in this environment.”

Brought into the fold, with a brand new Harrison Roach model Thomas surfboard under his feet and an open invite to the Deus 9 Foot and Single, fresh experience opened to the Canggu surfer and his skills progressed exponentially.

Now, on the cusp of the sixth annual 9 Foot and Single, Ayok embodies the role he has taken on so often in his working life, as genial and gracious host to an influx of travelling surfers in the breaks he has every right to call his own.

Though his history has been sheltered, spanning little more than a scooter ride from his Canggu home, Ayok’s heart and spirit encompass the global surfing community, an ambassador for his home, his passion and the waves that have sculpted his life.