Harry ‘the Hat’ Holiday is no stranger to Bali and the Deus Temple of Enthusiasm, a regular visiting place for this global gypsy.

Harry’s stylised surf art, with its ethereal qualities and surf-saturated influences, is embraced all over the world, wherever his passport takes him, his beaten up travel suitcase unlatches and a rainbow of vibrant prints spills forth. Surf festivals, community markets or a dusty sidewalk where his footsteps often find him, his is an unpretentious artistic persona, not bound by the formal constrictions of gallery walls or high class gatherings. 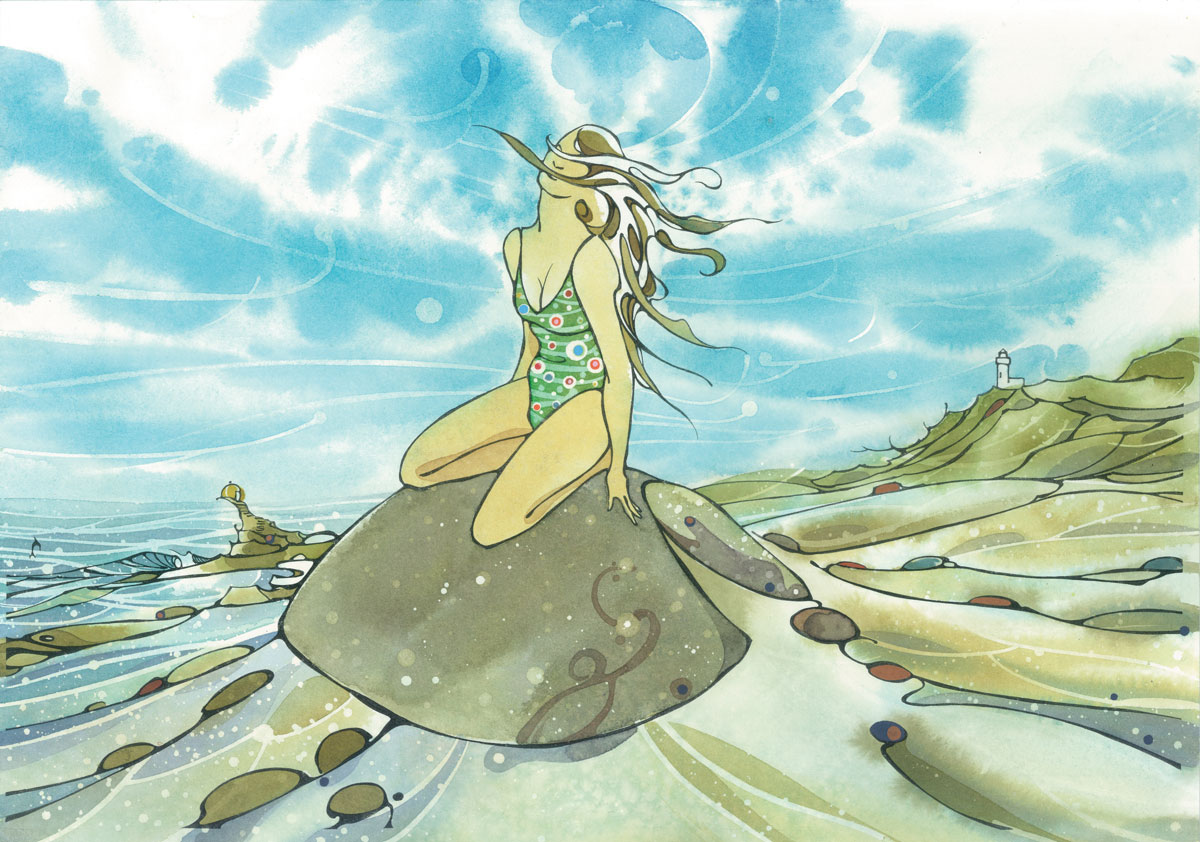 Harry grew up in San Diego, the abundant surf community and his artist mother’s influences imprinting themselves upon him indelibly. His passions orbited the golden sand, in and out of the water; the surfing, the people and the lifestyle his influences. Early doodlings on the kitchen table revealed a natural talent, “the first thing I was good at”, he humbly states.

Growing up, art was his escapism, as was his surfing, and the two infused, creating an unmistakable style at a time when surf art was little heard of. He met Andy Davis, now himself known internationally as an aquatic artist, when Andy launched his surf company, Free. The pair developed a symbiotic relationship, Andy creating a line of surf apparel and Harry providing the artwork emblazoned across it. But when Free’s viability began to wane and the dollars dried up, Andy – who had already been experimenting with his own artwork – asked Harry for lessons, and Andy’s future as a surf artist was born. But that’s another story for a different time…

Over the next few years, Harry’s passport took a beating, just like the suitcase stuffed with prints that travelled with him wherever the next plane ticket took him; across America, Europe, Asia and Australia.

Diversifying his repertoire, he took on a new moniker, that of Harry the Hat, breaking away from the now increasingly commercial genre of surf art and into children’s books and images, inspired by the surrealism of Dr. Seuss – art for art’s sake, not as a commercial exercise.

But his simplistic line drawings with their dreamlike washes of watercolour never lost their appeal, and his renown as a surf artist first and foremost remained. Exhibitions came and went, his recognition endured, and to this day, the majority of his time is still devoted to what he loves: peddling his prints out of his weathered, old suitcase, meeting people, immersing himself in surfing’s cultural world and sharing the visual representations of his oceanic experiences.